Kalekye Mumo has a had a good stint for 10 cool years of pure bliss and possibilities after starting off on Rush hour where she made a name for herself alongside bad boy Shaffie Weru. Their Camaraderie and chemistry was so good that they moved to the morning show where she has been doing her thing up to now.
What begins must always come to an end, the saying goes and unfortunately for all Kiss 100 listeners, that time has come as Kalekye Mumo will no longer be entertaining you in the morning. After getting inside information pertaining to her exit and according to her; the time had come where she has to make that major step in her life, she had to rebrand. She still had a lot of adoration for her fans that have been a major pillar of support and she will continue to cherish them just on another capacity.

Kalekye Mumo revealed that her PR company had signed a major contract with one of the biggest makers of quality blends of Tea, Kericho gold.
Kalekye Mumo recently turned 40, lost a whooping 40 KG’s and promised more bigger things were coming; I guess this is the time.

As Kalekye Mumo turns 40 this year, she has never looked better. And this is all thanks to her dramatic 40 Kg weight loss that saw her look much younger than 40.

In a period of 8 weeks, Kalekye Mumo managed to shed off the Kilos and the years thanks to the intervention of Fat Loss Lab Kenya as she revealed during her party. 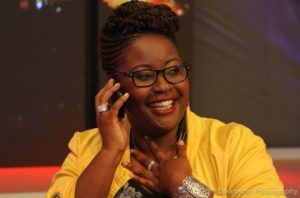 Fat Loss Lab Kenya is an individualized and medically monitored weight loss program that prides itself in using food only to balance hormones and lead to fast fat loss such as Kalekye’s.

This was one that had rumor mills on overdrive both when it came and after the ‘couple broke up’. Neither affirmed nor denied ever having a thing in what was a typical case of opposites attracting. When it seemed each had moved on to someone else, there were more rumors that it all fell apart as DJ Sadiq could not meet the lavish lifestyle of the radio queen.

After graduating, Kalekye Mumo worked briefly at the Turkish Embassy, then she began working at HomeBoyz way back when it was a small deejay outfit based at The Mall, Nairobi. She then moved to do sound production at Rough Cuts. After that she went to Medeva TV as a sound engineer, then to Capital FM as a breakfast host before leaving for Kiss as a news editor and reader and finally a Drive presenter.Then on the Morning Kiss as a breakfast anchor.she has currently, quit her job in Radio Africa Media Group to start her own entrepreneurial ventures to look for greener pastures.

Below are some of the numerous facts about Kalekye Mumo that you didn’t know.

1. At the point when Kalekye Mumo was only three,she was determined to have a hip condition that left her immobilized and had a thrown for a few years.

2. Kalekye Mumo weight has never been an issue to her,she cherishes and has trust in her bends and we as a whole realize that certainty is an extremely appealing attribute!

3. Kalekye Mumo optimal man ought to be God-dreading, monetarily steady and one who takes control adding that ” I need to return home to a man who takes over the reins. I will let him. I can be compliant.”

4. Kalekye Mumo has an enormous gathering of shoes and sacks (possibly we can obtain them at some point) and you will seldom find her shaking the same sack or shoe twice

5. Kalekye Mumo is a bourbon young lady, Jameson to be exact! Her first auto was a red little cooper including that “I generally cherished an auto with character. An auto says a considerable measure in regards to you.”

6. Kalekye Mumo has touchy inside disorder (endless stomach torment, uneasiness, bloating, and adjustment of entrail propensities) so when she visits you bread and drain are a no-no!

7. On her first day on air, the morning show host challenged her to ring a person she had met in a wedding a week before,which she did, all red-confronted however fortunately the inclination was shared and they dated for some time

8. Kalekye Mumo mum is her greatest fan however she is daddy’s young lady.

9. Kalekye Mumo first ‘genuine occupation’ after school was in 2001, at Homeboyz Stimulation. She was a manager.

10. Family assumes a major part in Kalekye Mumo’s life. Each other Sunday, you will locate her home with her family. Destined to a catering for mum and a father who worked at Kenya Bottling works, Kalekye depicts her folks as strict yet adoring

12. Kalekye Mumo co-has a show called Surge Hour with Shaffie Weru, the “terrible kid” of stimulation. In the appear, they handle some extremely major issues that most radio shows would timid far from.

13. In school, she did exceptionally well in sciences, yet knew it wasn’t generally her thing

14. After her secondary school, she settled on a choice to study media and interchanges, however her folks didn’t care for her decision

15. When Kalekye Mumo was three, she was determined to have a hip condition that abandoned her immobilized and in a cast for a few years.