Louis Otieno deaf. Former KTN anchor, Louis Otieno, has for the first time appeared in public after staying away from the limelight for quite some time.

The once celebrated anchor, who looks old and sickly, appeared before a Kibera Court on Friday morning to testify in a case where he is accused of murdering his late girlfriend, Careen Chepchumba.

Louis Otieno’s health condition has gone from bad to worse and this was evident when  he appeared before the court.

Apparently, the former anchor has lost his hearing and that’s why he had to hire an assistant who translated to him what was being said in the court.

Louis has been in and out of the country for
specialized medical attention but his health condition doesn’t seem to improve.

He currently lives with his mother because he is jobless and has no investment that can help him pay his bills.

The former anchor was one of the highest paid TV anchors but he wasted his money with alcohol and women.

Below is a photo of Louis in court together with his assistant who writes for him what is being said because he has lost his hearing. 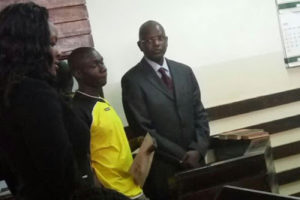 Careen S3xually abused by her dad

Louis Otieno, has revealed that the late Careen was sexually abused by her father.

While appearing before Kibera Law Courts, Louis said that Careen revealed this to him and sought for help because she was traumatized.

According to Louis, Careen’s mother was aware that her daughter was sleeping around with her husband but she swept the matter under the carpet.

“We used to leave at Rose Park Apartment in Kilimani in 2011. I used to be Chepchumba’s neighbor in a flat she stayed with her family. One evening, Careen told me she had something to share. She said she is victim of abuse from relatives; especially her father whom I realised wasn’t the biological dad. She intimated her difficult life with parents especially the step-father,” The former anchor told the court.

“Careen told me her parents warned her not to visit me. She then said she took up duties done by her mother; that would include sl33ping with the dad and if he wanted to travel, she would pack his belonging including sorting out and filing his business documents.

One day she ran into my house which was unlocked. Her dad was chasing her down the staircase. She said the father wanted to kill her.  I stood at my door and told him (Careen’s father) it was unfair to beat her. She went back home an hour later. The next day, she told me she would move out of her parents’ house. He added.

Careen was found dead in her apartment with a letter that had fresh ink written,

“I wish they would let me do my way. Even if we were not together, you are still in my heart. You will still remain so dear to me Louis.”