Eunice Wanjiru Njoki popularly known as Mammito is a comedian at Churchill show.

Things you dint know about Mammito.

-She  was brought up by a single mother. Her mother was a tailor and worked hard to ensure that they never lacked.

-She grew up in Kibera No.7

-Mammito attended Laini Saba Primary School and later Gatero Girls High School in Nyahururu up to form three and then Silanga Mixed Secondary in Kibera where she sat for her KCSE exams.

-Her mother later relocated her to ‘ushago’ due to influence from peer pressure. While there, she helped her grandmother sell school uniforms and other forms of clothing.

-She has younger siblings. She has other siblings who are very young. Her immediate follower was born when she was in form three.

-She is currently not in any relationship. 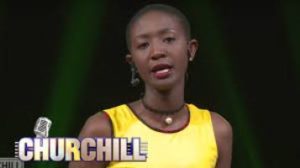 -She auditioned several times at the churchill show before she got a chance.