Sarah K started from humble beginnings selling vegetables to becoming one of the most celebrated gospel artists.

Sarah K is married to a pastor, and together they are blessed with three children.

Her career in music started off by borrowing money which enabled her hit the studios  and would market her music from door to door and also sold in the streets a task that was not easy.

Most of her songs are in kiswahili as she grew up in Loitokitok, on the border with Tanzania, where she was exposed to Kiswahili more than he mother tongue.

Her first album called ‘Wamtumainio Bwana’ was produced in 2000 and in the year 2003 she released her third album which was called ‘Milele Daima’ and included the hit song ‘Nasema Asante’. 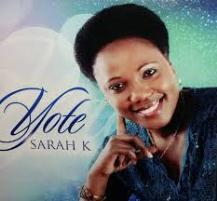 -2014 Groove Awards Female Artiste of the Year winner.
-Her song Hakuna Silaha was voted as the top Worship Song of the Year.
-The Music Society of Kenya feted her in the Shujaa Award category.