This follows continued harassment of Kenyans on the island, which the maps clearly show lies squarely on Kenyan territory, by Ugandan soldiers as Uhuru does nothing to help.

Speaking in Nyanza over the weekend, Raila revealed that Uhuru has allowed President Yoweri Museveni to occupy Migingo as they laugh at Kenyans suffering on the island.

The former PM told Uhuru to stop laughing with Museveni and lay full claim to Migingo before things get out of hand.

He challenged Uhuru to be as firm as former Presidents, Daniel Arap Moi and Tanzanian’s Julius Nyerere who sent former Ugandan President Idi Amin away after he tried to encroach on Kenyan and Tanganyika lands respectively.

“President Uhuru should stop begging his Ugandan counterpart Yoweri Museveni over Migingo Island, and lay full claim to the land and property of Kenyans,” Raila said in Bondo where he held a roadside rally. 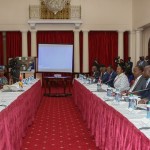 “Uhuru is sitting pretty laughing with Museveni while the Uganda People’s Defense Forces (UPDF) are terrorizing innocent Kenyans on the island. Migingo is Kenyan territory from colonial times and we cannot cede it,” he added.
The Kenyan DAILY POST