Salim Swaleh Citizen TV. Citizen TV, added a new talent to its array of gifted news anchors by bringing on board Salim Swaleh who has been anchoring Swahili news every Sunday, beginning June 19. He took over the Sunday show from the powerful duo of Lulu Hassan and Kanze Dena.

Salim Swaleh Citizen TV, was an editor at Islamic Republic of Iran Broadcasting (IRIB) which has its headquarters in Iran’s capital, Tehran before joining Citizen TV.

Salim Swaleh Citizen TV, was also a radio presenter and a special analyst on African news on the IRIB’s affiliate, Press Television.

The Sunday show is called Nipashe Jumapili. Besides news, he will be bringing in heated up discussions on matters politics, economy, law, social debates among other topics. 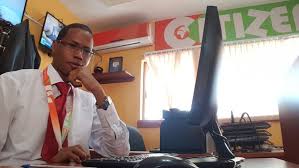 Salim is married to the love of his life Sherry, for the past seven years and together they are blessed with two children.

Citizen TV has announced major editorial changes as the station positions itself ahead of the next year’s polls in a move that will see former news anchors and continuity show host make grand returns to the screen.

Uduak Amimo,the Cheche show moderator and Hussein Mohammed will now sit in for Anne Kiguta who has taken her maternity leave. Uduak moved to the Dennis Pritt based television in 2012 after her successful stint at BBC. She has been lauded as one of the best political debate moderators and is highly expected to bring in her wealth of experience to the ever heated Opinion Court debates every Thursday. Hussein Mohammed moves to Sunday Live.