Former Prime Minister Raila Odinga is set to hold a parallel State of the Nation Address to President Uhuru Kenyatta’s.

This was revealed by Homa Bay Women Representative, Gladys Wanga, who said that CORD will boycott Uhuru’s State of the Nation Address this year and instead attend Raila Odinga’s address, which will be held parallel to his.

Speaking yesterday, Wanga said CORD legislators will not sit through Uhuru’s address to be lied to on how the Jubilee administration has made progress in the country when in real sense the country is headed for a nosedive. 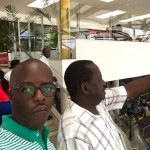 She also took a swipe at all the Cabinet Secretaries, accusing them of lying to Kenyans that the Government has made progress yet there is nothing to show for it.

What UHURU’s wife said in US that made the audience cry and give her a standing ovation!