Judith Nyambura Mwangi popularly known as Avril, is a Kenyan singer, songwriter, actress and entertainer.  Singer Avril as a singer, is popularly known for her singles “Mama”, “Kitu Kimoja” and “Hakuna Yule”.

Singer Avril was born on 30th April 1986. She was born and raised in Nakuru.

Singer Avril was very active in drama and music festivals while in high school. In 2005, she partook in the Jaza Lorry initiative and met talent manager Emmanuel Banda of Ogopa Deejays Production. Although Banda tried convincing her to venture into music, Avril remained hesitant at the time. She enrolled at the University of Nairobi in 2006 and studied design. During her second year at UoN, she changed her mind about music and recorded her first single (“Mama”) after signing a record deal with Ogopa.

This song was released in 2009 and sent to radio stations across Kenya. Avril was later featured on Colonel Mustapha’s “Mtaani dot com”. Avril began to gain prominence following her collaboration with A.Y on his 2010 single “Leo Remix”. In November 2010, she was featured on Marya’s breakthrough single “Chokoza”; a song that received numerous radio airplay. On 31 January 2012, Singer Avril released her single “Kitu Kimoja”. 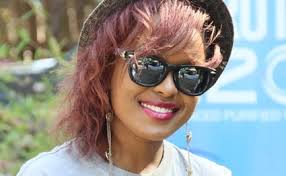 ured on the chorus of Boomba Boyz’s 2014 single “Piga Kengele”.

Singer Avril as an actress, is best known for playing Miss B’Have on Shuga: Love, Sex, Money (2012). Her contribution to the Kenyan Entertainment Industry has earned her one Nzumari Award, one Kisima Music Award, one Golden Mic Award and two Chaguo La Teeniez Awards.

Singer Avril has been involved in several humanitarian campaigns, including the Chagua Amani Peace Campaign and Kenya Land Alliance. she has also been appointed as one of East Africa’s ambassadors for Oriflame Sweden and AMREF’s Save an African Mother Campaign.

While Speaking to Citizen FM’s Mambo Mseto Show Singer Avril disclosed that her wedding would take place in 2016.

Without confirming the exact date of her wedding, she divulged details why her much anticipated union had not taken place soon despite being engaged to the businessman since February 14, 2014.

“Most of the time, a wedding ceremony is done for the parents. Once the two families meet and introductions are done, then we can be given the green light to wed,” Singer Avril intimated.

In a 2014 interview she also explained why her wedding was taking long to materialise.

Avril told: “The wedding will not be that soon. He is Zulu and I am Kikuyu and there are some cultural things involved in the entire process.”

The ‘cultural things’ are what Avril says are currently holding her back from her nuptials.

“If you are a parent, and your child reaches that age she should settle down, and she’s identified the person she’d love to spend the rest of her life with, you’ll have to conduct background check on the partner she’s chosen,” she stated.

“For my case, there are still some background checks being done,” revealed the voluptuous entertainer.

Asked what she will do if her parents find her fiancé ‘unfit’ for marriage, Avril said: “I will take some time to try and talk over things with them because at the end of the day, marriage will be between him and I.”

“If they (parents) are not impressed with my choice, I will just have to force them to,” Singer Avril concluded. 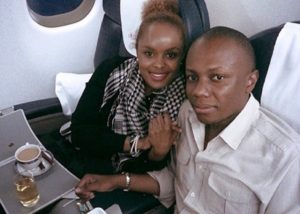 The jovial singer first made public her relationship with her South African lover in February 2014.

“I am dating a very loving man from South Africa and he is based there, not Kenya as many people have said. We met in 2012 and we became quite good friends from then on. We did not start dating until sometime in 2013 and in him I have found a man of my dreams, a real gentleman,” said Singer Avril.

Now that she has confirmed the wedding will indeed take place in 2016, will she raise her family in South Africa or Kenya?

“Kenya is my home but if we get married, I am obligated as an African woman to be with my husband. With my man being the sweetheart he is, I am sure we will have homes in both countries,” she told.

Back in February there were rumors that Singer Avril had split up with her long-time boyfriend, a South African man by the name Tinashe Leslie Mugadza.

This was after the two spent Valentine’s Day away from each other. Singer Avril recently confirmed the break-up and disclosed that she had taken a break from their relationship and delved into work.