Victoria Rubadiri is a news anchor at NTV.

She  opened up on how falling pregnant at 18 made her desperate and
left her thinking of procuring an abortion.

In a wide-ranging interview, Vicky talked of her devastation and desperation after discovering the unplanned pregnancy.

Vicky got pregnant while studying journalism at Temple University in the United States where her family was living.she revealed how she resolved to procure an abortion because it was 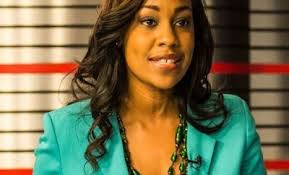 the only solution she had in mind at the time.

“It was a scary experience to find out I was pregnant, and the hardest part was to let my parents know since I never wanted them to go through that,” said Vicky.

When she confessed, Victoria  Rubadiri’s father ruled out the abortion and her entire family helped her through it.

“I have been severally invited to speak in churches and institutions where I always share my story to encourage a young person whose life has taken an unexpected turn,” says Vicky.

Victoria Rubadiri has a daughter who is now ten years old.

Vicky’s family moved back to Kenya in 2010, a year after she had graduated, and she stayed with them while trying to find a job.

She holds a Bachelors Degree in Broadcast Journalism from Temple University in Philadelphia, ennsylvannia.

Victoria Rubadiri has a background in radio working as a business journalist and news presenter at Capital FM in Nairobi for almost two years. She later progressed to become a news anchor and reporter at NTV.

The NTV news anchor is Malawian on her dad’s side, but on her mum’s side she is a total cocktail of good genes. She is Kikuyu, Maasai, Kalenjin, Scottish and Seychellois.

They have always made it to lists of perfect anchors chemistry. They also have made it to the wish lists of many as the best couple we would love to see. They have all denied this.

Victoria  and Larry Madowo have the most amazing palpable chemistry on Kenyan TV and many felt that there was a lot of love going on behind the screens.

So it was only natural that people thought that the two were dating something which Larry and Victoria  have denied.