Waihiga Mwaura is an Award Winning Broadcaster, Anchor and Reporter at ‎Citizen Tv.

Having worked for Royal Media for only a few years Waihiga Mwaura set a mark on the map of Africa by
winning the much coveted CNN Africa journalist of the year award in the sports category.

This is despite the fact that Waihiga Mwaura doesn’t have formal training in journalism.

Growing up, like many other kids, Waihiga’s career choice changed from pilot to doctor to engineer.
He however proceeded to Africa Nazarene University where he graduated with a degree in Computer Science.

“I hated IT when I started internship,” confesses Waihiga Mwaura.

So Waihiga  sought other opportunities outside the computer world. His journey in journalism started when he interacted with several journalists and came to love the profession because it is ‘diverse and fun.’ 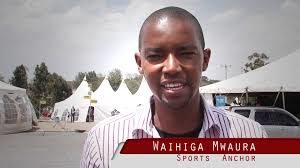 “It all started at Citizen TV in 2009 where I was hosting a show called Zinduka that used to be aired on Wednesday evening after prime time news. It was a youth entrepreneurship show that featured different initiatives and things that help the youth,” says Waihiga Mwaura.

Waihiga Mwaura later joined the Power Breakfast Show in 2010 after learning the ropes of sports reporting.

“The weekend show needed a sports anchor and that’s how I got a chance to be a sports anchor.”
“What drives me is impacting the world, and as a Christian, I am compassionate to world issues and I believe in purpose and what God has planned for me,” adds Waihiga .

“The CNN moment was an amazing and exciting experience for me. Actually many people have thought that my career has grown in a short time. I actually have a lot to learn and it is all about God…

it’s a moment that I will never forget. It’s a big deal and a proud moment for me.”

Part of the learning, Waihiga says, is taking a Masters class in Communication at Daystar University. 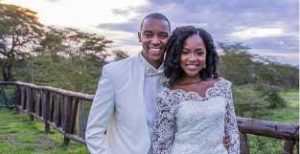 The ceremony was held at  Sawela Lodge in Naivasha where a good number of Citizen TV journalists were in attendance.

Little was known about the couple’s courtship, and when news of their wedding broke, it was splashed on many local websites and blogs.

Waihiga Mwaura and Joyce Omondi opted for an intimate out-of-town wedding, and close friends, family and members of the media fraternity attended the lavish ceremony.